Agroville! A destination of countless experiences!

After a rather laborious route with several turns we approached our destination: Agroville. In the final 500 meters or so, we ascended a dirt road which clearly signified the existence of something different. Truth be told, for a minute there we wondered if we had been lost! Arriving at the gate, however, we marveled at the village with the wooden and stone houses; harmonically built between nature and the mountain, we discovered a haven of serenity and rejuvenation. 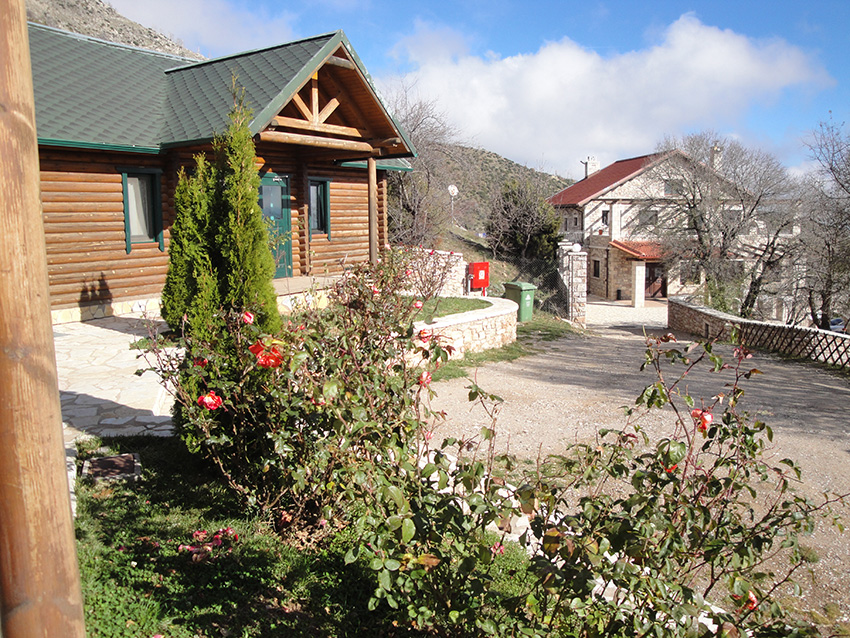 We arrived on a Friday afternoon. The Agroville staff welcomed us warmly and treated us to some tsipouro in order to “sit back and relax” as they said, in order to rest up from our trip there. As we enjoyed the tsipouro and met Mr. Thanassis, the manager of Agroville as well as the rest of the staff, our luggage was taken into our traditional stone mansion. We did not have to carry anything, and were just led to the mansion to check it out.

Upon opening the door, we were in for a surprise. The fireplace was already lit, warming up both the house as well as the atmosphere. The lighting from the flames was quite cozy indeed! The mansion itself was a revelation, a harmonic combination of stone and wood with traditional touches here and there. A central living room was present to accommodate all of us, along with private rooms to relax in. Of course, everyone wanted to sleep in the attic which was particularly warm and cozy; in the end, we cast lots for it.

After we wondered around and discovered every nook and cranny of the mansion… it was time for supper! Some more surprises awaited us there, gastronomical in nature. 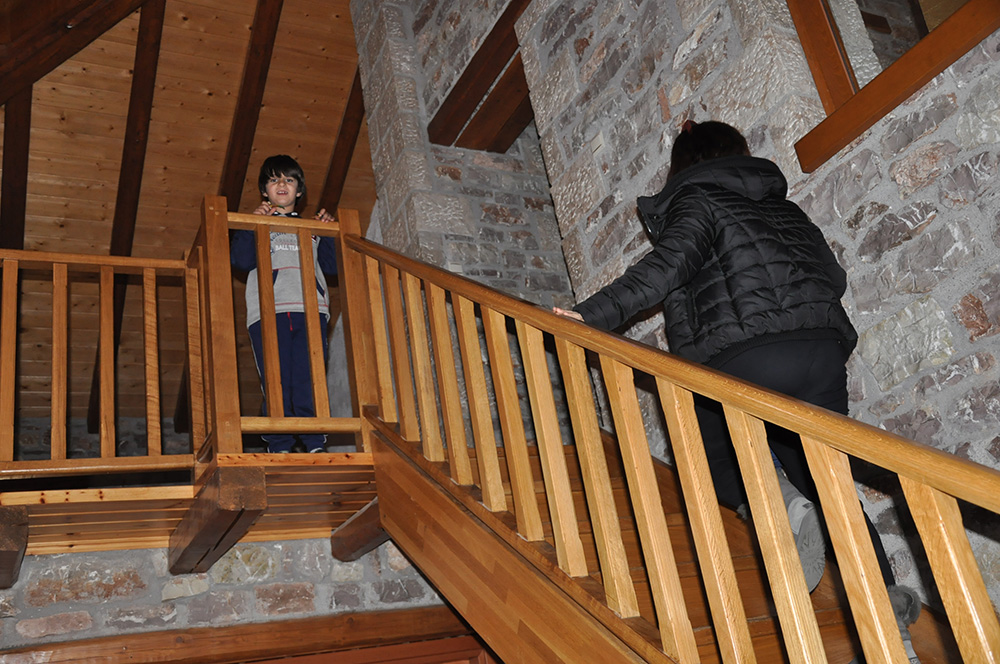 We had chickpeas, slowly cooked in a pot! A unique taste experience which can be appreciated even from someone who does not usually eat legumes. Also, a salad with local organic vegetables, grown in the garden; tasty and pure at the same time.

To accompany the salad, a unique roasted haloumi cheese, definitely among the best we had ever tasted, handcrafted with love by Mr. Tolis, the owner of Agroville. We finished up with traditional spinach pie, as traditional as it gets, with locally produced feta cheese, village dough and fresh spinach. Some of us having a sweet tooth enjoyed a spoonful of wild orange sweet, created by our hostess!

Dinner was excellent, both in terms of food as well as in terms of hospitality. We had only been at Agroville for 4 hours and felt right at home!

After dinner, we settled in the stone mansion and enjoyed each other’s company at the fireplace, having a chat with wine at hand, until some of us got sleepy and decided to go to sleep at long last. On the next day we woke up early in the morning because we had a schedule to follow and did not want to miss a thing!

We met up for breakfast at the reception, fueling ourselves for a day filled with action and experiences. Breakfast was exquisite, full of traditional produce and organic foodstuffs. Pancakes, apple pie, pure forest honey, fresh milk from Agroville cows, bread roasted in the wooden oven, home-made pastries, eggs and omelets from the farm’s chickens, to mention but some of the choices available! 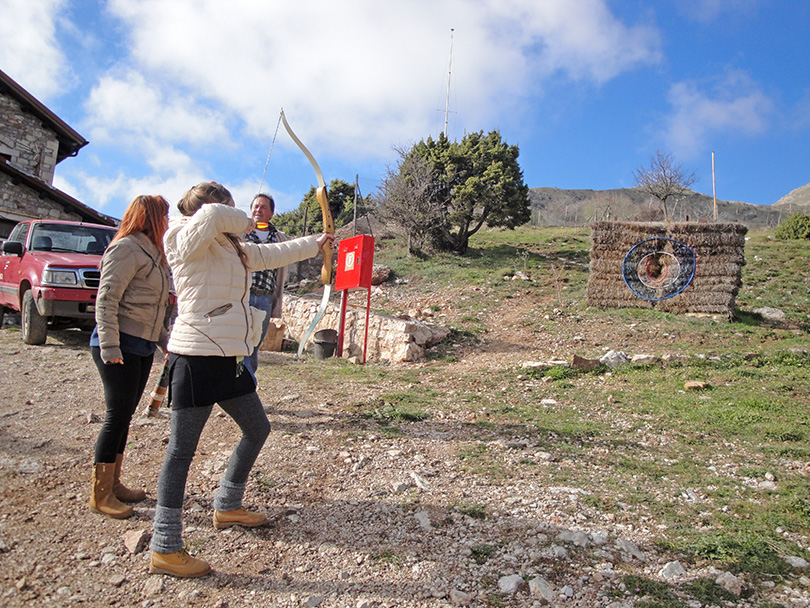 And a day of action and unique experiences begun: We started with some archery, as we had scheduled the day before. As we were finishing up, Mr. Tolis asked us out of the blue if we wanted to “help him push the cows of the neighbor”, and we said yes without exactly understanding what he meant. He meant…exactly what he said, and we had to push some stray cows outside the farm, laughing along the way of course for about half an hour!

Shortly after, Mr. Tolis wanted to thank us for our help in cow-pushing, and offered to take us for a ride with his jeep on the mountain. At first, we thought that we would just ride around with the jeep, but then we realized that we would climb the mountain up to its peak! A somewhat scary prospect, but wow, climb to the top of a mountain in a jeep, this surely felt exciting! To be honest, as we climbed some of the ladies in the group struggled to maintain their composure, but the peak rewarded us! We felt as if we touched the sky, over the clouds and almost like we were flying, a very pleasant sensation surely! At the top of the mountain we found a small chapel which we visited and lit a candle inside it. There, we also met another group staying at Agroville who had opted to climb the mountain on foot; they were as amazed as we were, looking over the world from up high. 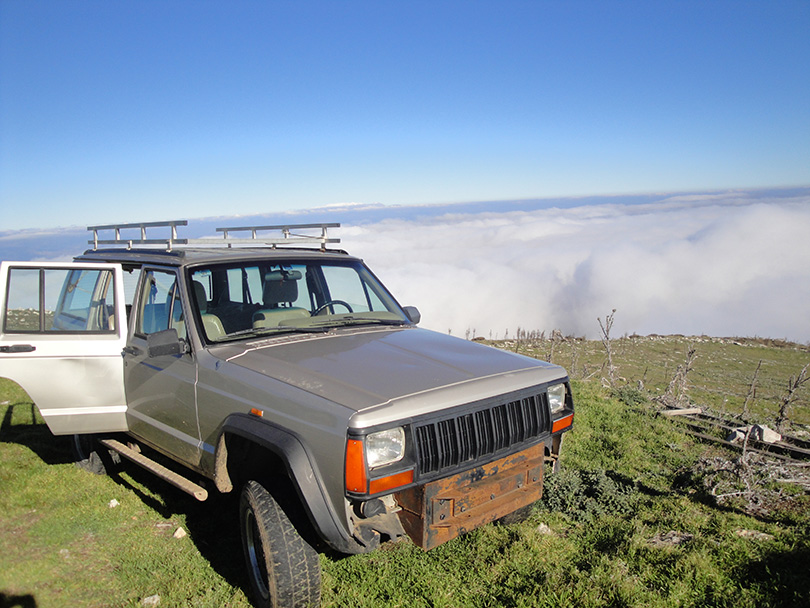 After this absolute experience we climbed down to the reception for lunch. Today’s menu included village rooster cooked with wine, or pork roast slowly cooked in the wooden oven, an amazing mushroom pie, another pie with village greens, a couple of different salads and warm bread just baked in the wooden oven! Of course everything was tasty and excellent! 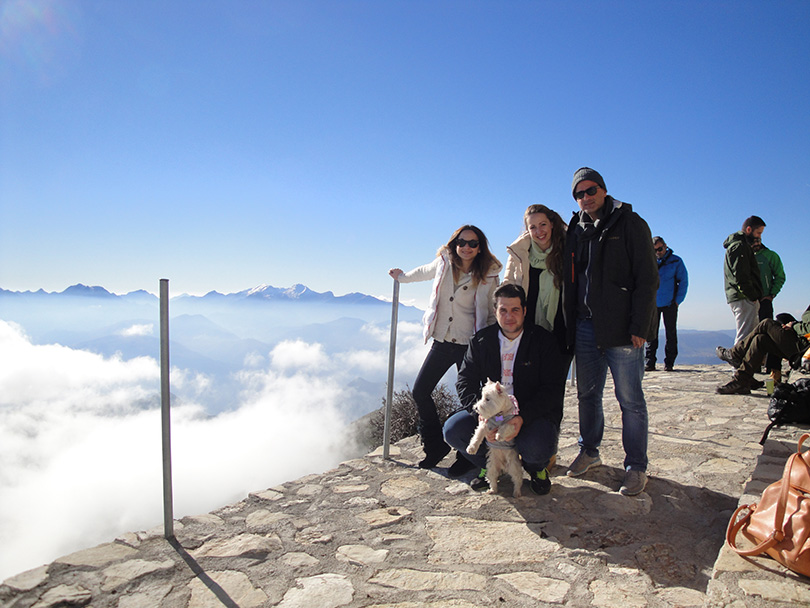 After we enjoyed our lunch with some wine, we returned to our traditional mansion for some rest. Our next activity was set for 4:30 pm, when we would visit the animal farm. Upon arrival, a new fascinating village experience awaited: First off, we saw the horses of the farm, broadly impressive both in terms of size as well as muscle strength. A cute foal, aged 40 days old, Hermes, was there as well! It was sitting next to its mom entirely carefree probably enjoying the attention given to it as well as the photos! 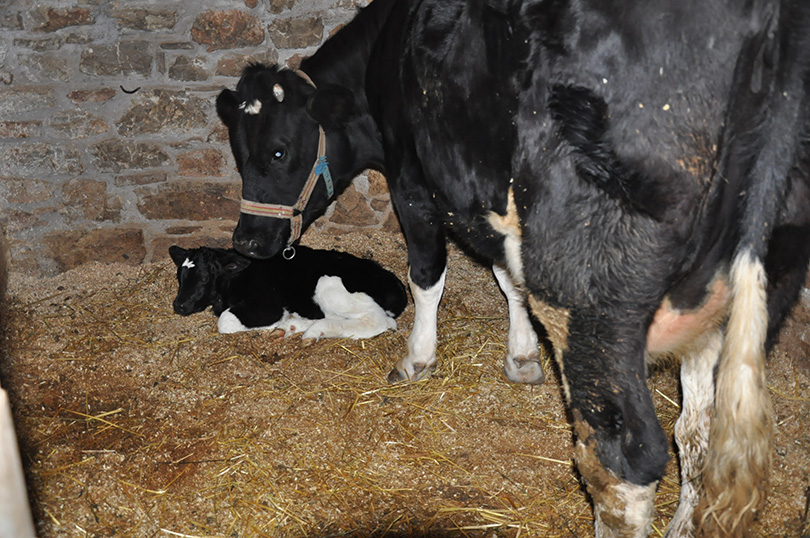 Right next to the horses we were shown to the farm’s cows. Someone in our group had never seen a cow up close and was very impressed with its sheer size. The rest of us had our hearts melt when we saw the little calf, just a few days old, breastfeeding silently. At that point we were briefed on our mission: Milk the cows! After a short tutorial to get us there, we milked them to high heaven! 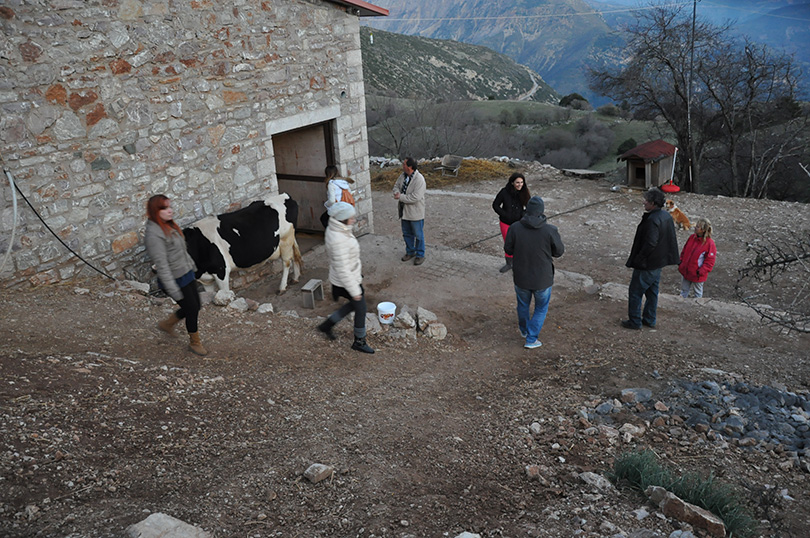 Shortly afterwards, we visited the henhouse where we gathered eggs and carefully put them in the egg collection basket. The eggs were passed to the farm’s cook to use in their next recipes. Finally, we had the chance to feed some small lambs with fresh milk, especially Eat’em-all, a hungry one who would not let go off the bottle! 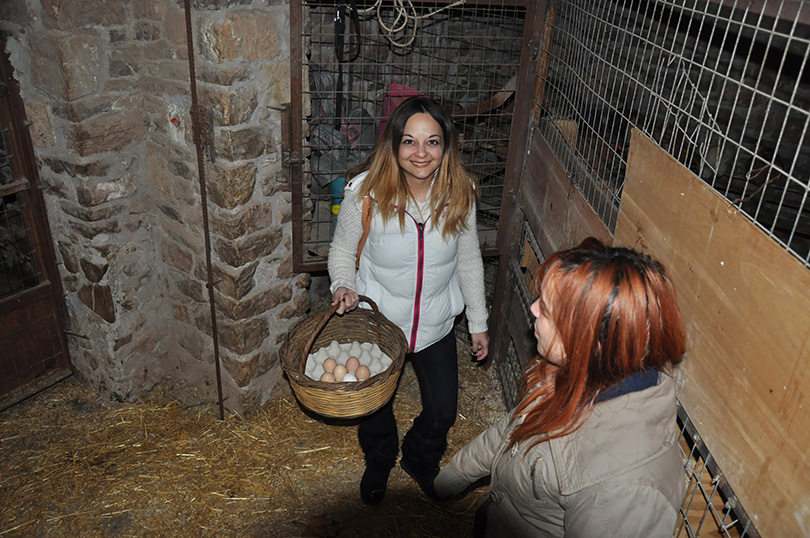 Getting back from the farm we had spare time and split in groups. The more athletic ones played table tennis in the playroom, while others opted to relax by the lit fireplace in the reception playing cards. 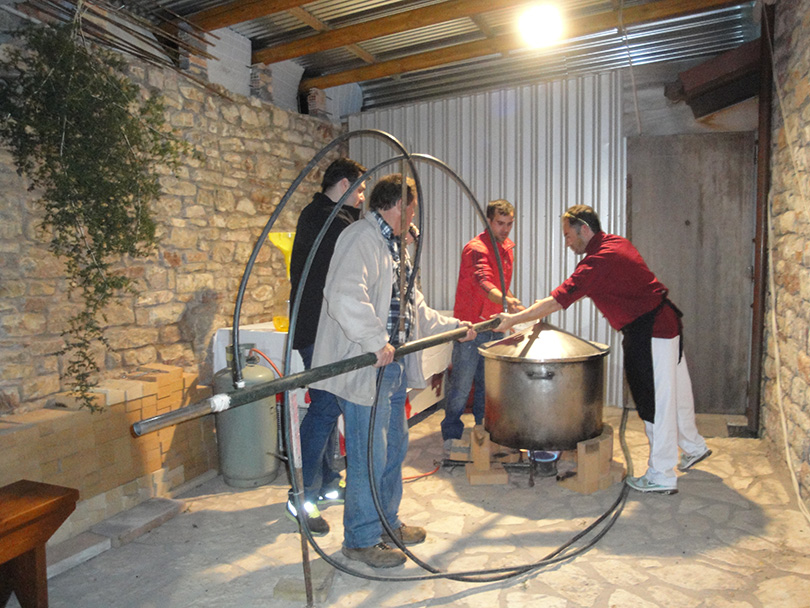 We met again at the tsipouro event which followed suit! Next to the lit wooden oven, a cauldron was set up and we were introduced to “Tsipouro distilling 101”! Mr. Tolis explained the procedure involved and had us taste a bit, warning us to drink moderately because it was too strong. We ignored his pleas and quickly formed a laughing, dancing singing mess of a group, together with other guests! The cook lady kept supplying us with tasty treats to accompany our tsipouro with

On the next day we woke up early not only because we had a lot of things planned but also because everyone was anxious to have some quality breakfast! We were overjoyed to find out that the eggs we had gathered the day before, as well as the milk from the cows, formed a part of our breakfast today. Agrotourism at its finest, I’d say! After our breakfast, it was time for some activities! We began with horse riding; the wonderful horses we met yesterday would have us ride them today. 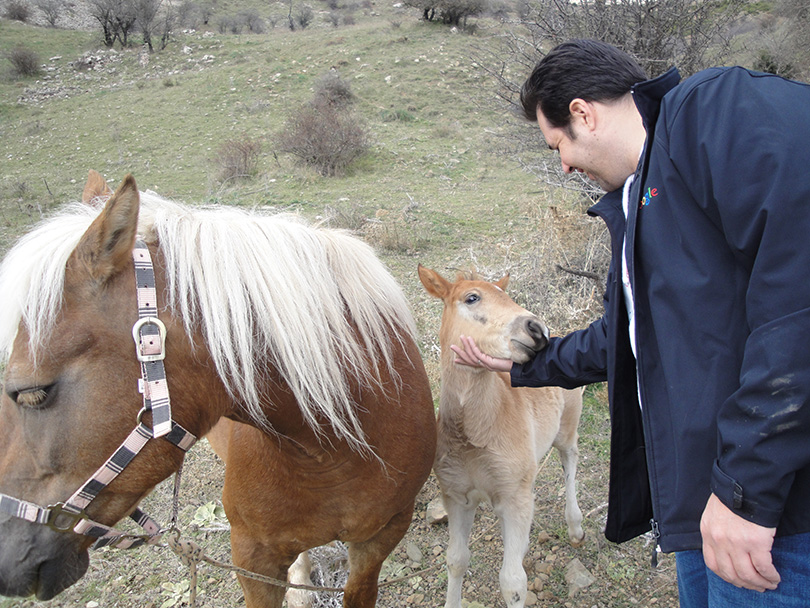 Carrying on, we visited the adventure field which forms a triathlon of action and adventure. It seemed somewhat daunting at first, so we let the junior member of our group try first, and he managed this very well! The first stage was wall climbing. 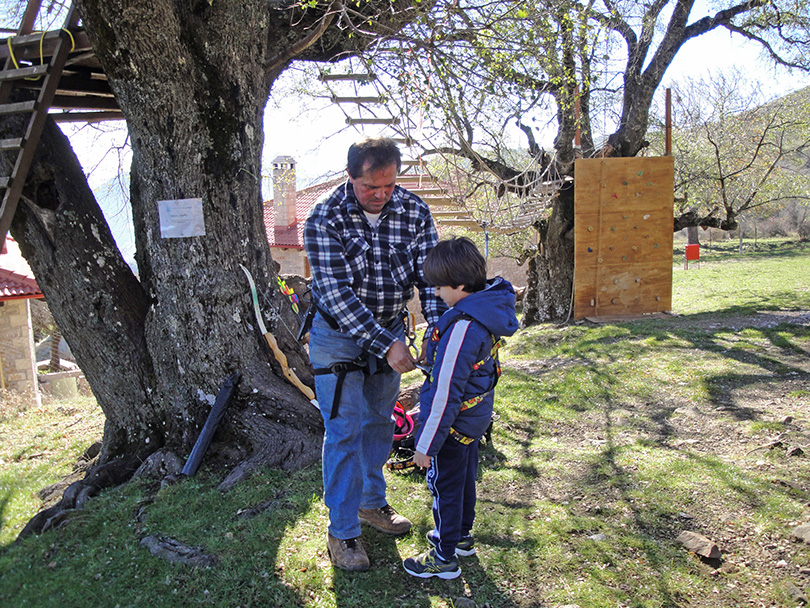 This looked hard… and the wall was not set-up for novices really, but the kid pulled through! After that, he had to cross a rope bridge, an exercise of balance which became harder when “wild winds” (read: Mr. Tolis) disturbed the rope bridge severely and made it quite impossible to hold onto! Finally, he had to leave the adventure field using either Flying Fox or Rappel. He opted to fly like a fox, darted through the air and completed the challenge. The moment he got down, his broad smile was proof that he just had a unique experience and set ourselves up to take turns in it. 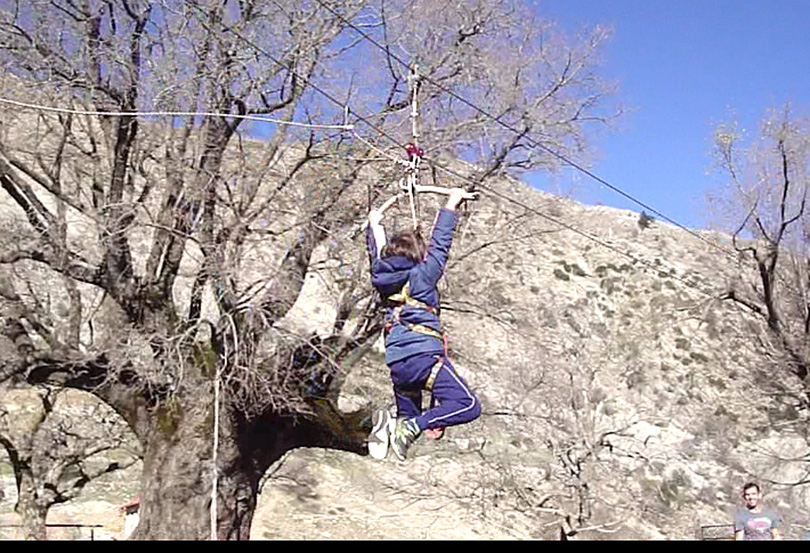 Our long weekend was coming to an end, we were not looking toward this of course!

The people of Agroville prepared an excellent parting feast for us, in order to wrap up our visit in this wonderful farmstead which granted us unique experiences. Traditional moussaka, snails from the area and village greens gathered by another group staying at Agroville, along with lamb chops. Once again, we congratulated the Agroville chef and were really on our way. 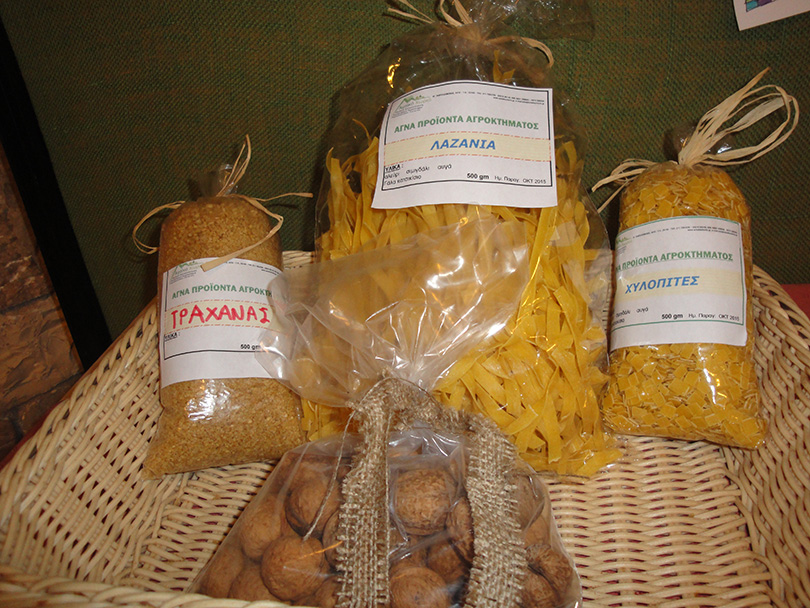 We had the opportunity to buy some local products to remind us of Agroville, and we did (we could not resist to haloumi, you see). After we said goodbye to Mr. Tolis, his daughter Marilena and the rest of Agroville staff, we set off on our trip back. Of course, we promised ourselves that we would come back soon, since we really enjoyed the Agroville experience!

Thank you, Agroville, for the unique moments and experiences!